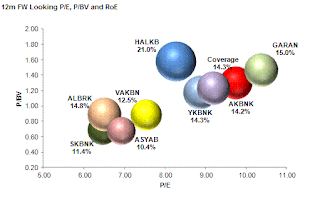 We think that it may be the time for a switch from Garanti Bank (GARAN.IS) to Yapi Kredi Bank (YKBNK.IS) based on following fundamentals.
i. YKB has relatively favourable valuation with 12-m fw looking 8.85x P/E and 1.18x P/BV vs. Garanti Bank’s 10.36x P/E and 1.47x P/BV.
ii. Recent positive developments in Spain have been broadly priced in for Garanti Bank through BBVA, but not yet for YKB through Unicredit of Italy.
iii. In a low inflation environment CPI linkers contribution is expected to diminish for Garanti Bank, but YKB has almost no exposure to CPI linkers. So YKB may enjoy a better NIM formation in the coming periods.


iv. Diminishing cost-of-deposits is likely to work in favour of YKB as the bank has one of the highest loans/deposits ratio on the Lira side among our coverage.
v. YKB may have better net non-interest income as the bank has relatively better control over opex.
vi. Both banks have similar loan compositions. YKB’s relatively higher exposure to credit card business may be seen as riskier in terms of potential NPLs, but the historically low unemployment ratio may limit the NPL inflow from the credit card business.
vii. Sale process of insurance arm will continue to act as a positive catalyst. We assume that the transaction will be similar to the one that Garanti Bank did in the past. We forecast a possible sale revenue of TRY 900mn (TRY 250mn from the full stake sale of Yapi Kredi Sigorta and TRY 650mn from the 50% stake sale in Yapi Kredi Emeklilik).
Bunu E-postayla GönderBlogThis!Twitter'da PaylaşFacebook'ta PaylaşPinterest'te Paylaş
zaman: 10:25
Etiketler: GARAN, GARANTİ BANK, YAPI KREDI BANK, ykbnk